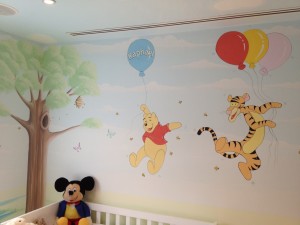 Here’s a small selection of Disney Style Murals that I have painted over the years. They include the ever popular Winnie the Pooh, which was one of my very first London murals. Other favourites include Mickey Mouse, a figure universally appealing to children and, indeed adults, at any stage in their life, and the wild and wonderful world of the Lion King.

Whether you’re looking for nursery murals, or something for a slightly older child, Disney style murals will always capture the essence of fun and innocence that is arguably somewhat lacking in today’s technology world. It is the simplicity and variety of the characters found in Disney that make them a firm favourite with people of every generation, and why they still appeal to children today.

These popular nursery murals transport children to the magical world of Disney, igniting their imagination through an engagement with a land brimming with princesses, heroes and villains. Children can meander through a magical land with Mickey, navigate the sea with Nemo and enter an enchanted world with Elsa, all through the magic of a hand painted Disney style mural.

Thanks to the vast array of characters featured in the world of Disney, children can create their own stories simply by arranging painted figures on a mural, letting their imaginations run wild through the fun of a Disney style mural. Filled with familiar faces old and new, these popular London murals allow parents to take a walk with their child through the stories they originally came across when they were young, as well as discovering something new.

The enduring appeal of a Disney style mural is captured in this widespread reach to people of all ages – it’s perhaps no surprise that its one of my most popular London murals! Whether you want ideas for nursery murals or children’s murals, there is always something magical to be found in the fantastical world of Disney.